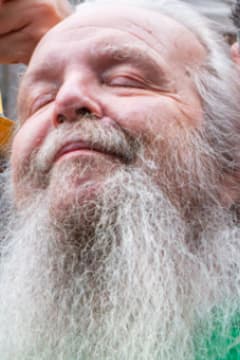 Obituary For William A. Green

Best known as Uncle Bill Green and The World’s Most Dangerous Poet, Bill was a performance artist – a bardic poet and Haiku master – a social critic with a clever and cutting wit, which he delivered at once with fiery barrage and the whisper of a butterfly alight a flower. He was a reader, writer, traveler, and music lover – a true bohemian. An avid ganja smoker, practicing vegetarian and peacenik, he was a lifelong follower of Buddhist philosophy and principles. A devoted and loving husband and loyal friend, Bill was an attentive listener who extended interest in and acceptance of those around him. A powerful and gentle man, Bill has left a unique legacy of wildly creative beauty and strength and has now entered a next phase of the “Quest Into The Unknown”.

Bill was the apple of his mother’s eye. He was raised in Piedmont, MO, which he loved, where, as a young boy he fished with his father at Clearwater Lake and along the Black River. Later in Kansas City, MO, he played football in high school and devoured books and the wonder of radio and early television, with shows such as the Lone Ranger and Wyatt Earp. As a young man, he attended the University of Missouri - Mizzou as a Communications and Theatre major before being drafted into the United States Navy during the Vietnam War at age 21. Stationed on the USS Intrepid in the South China Sea, Bill served as a photography mate, where in the darkroom of the aircraft carrier he first heard John Coltrane’s Love Supreme. At the completion of his military service in June 1967, he made his way to San Francisco and the Summer of Love, where he tuned in and turned on to the Grateful Dead, Janis Joplin, Beat Poetry, and so many others. He travelled the country some in the ensuing years – having some involvement with CORE – the Congress of Racial Equality and forming and dissolving an early first marriage. He found himself returning often to the mountains of Colorado and the Naropa Institute in Boulder, where he was further enlightened to Buddhism, vegetarianism, and other practices of peace. All these experiences profoundly and fundamentally informed and directed Bill’s way of being for the rest of his earthly existence.

Eventually settling in St. Louis in the late 70’s – paying the rent working as a driver for Yellow Cab – he met the love of his life Martha, at the Broadway Oyster Bar, as they danced at the fireplace, coolly accepting the fated alignment of the planets and stars of their heavenly constellation - they were married on November 25, 1983. Bill was a pillar of an important local poetry group, the Soulard Culture Squad, created by a mentor, Zeno. He and other group leaders published several books and hosted monthly public readings at favorite pubs in the neighborhood. After he and Martha moved to their permanent residence at 1917 Pestalozzi Street in the late 80’s, Bill found his spiritual home in the Venice Café, which opened next door as an artist’s haven and coffee house. Here he met some of his best friends, including jazz musician Bill Howell, who like many became in effect extended family. Bill worked as the Venice doorman and was the house poet, with many bands regularly providing a backdrop of music for his words – as his signature mantra of That Kind of September rang out, “Stupid and innocent, stupid and innocent...” Bill garnered much notoriety and respect, and once opened for one of his heroes, Timothy Leary, at a speaking engagement at The Sheldon. After associations with both Patricia Smith and Marc Smith (unrelated), and readings at the Nuyorican Poets Cafe in NYC, and the Green Mill Tavern in Chicago, Bill was inspired to and influential in bringing the first Poetry Slams to St. Louis. He was eventually recognized as a Warrior Poet, by River Styx, and knighted with a mighty sword.

Other notable highlights of his life included judging a Cannabis Cup contest in Amsterdam, Netherlands; kissing the Blarney Stone in Cork, Ireland; dancing at Día de los Muertos in San Miguel, MX; chilling in Big Sur, CA with friends and kissing his honey on New Year’s Eve in Paris, France! He enjoyed regularly spending the Winter holidays in Texas with his parents-in-law and cousin-in-law, Dorian Girard, and the rest of his wife’s family, as well as spending time at he and Martha’s good friend Jon Cournoyer’s family farm, for restful weekends in the Summer and in Autumn.

He was late to bed and early to rise, and he loved cats, St. Louis Cardinals baseball, HBO dramatic series, sushi and sake, and a great cup of coffee. He was a cowboy, a wizard, the Pope of Pestalozzi, a “very real and elegant hippie”, a “blissninnie” and a veteran of the Drug War. He was the W.M.D.P. and he is a love that’s love and will not fade away.

A private graveside service with military honors will be held Wednesday, November 10, 2021, at Bellefontaine Cemetery, 4947 W. Florissant Ave, St. Louis, MO 63115. A public memorial for friends will be held in near future at the Venice Café, 1903 Pestalozzi St, St. Louis, MO 63118. In lieu of flowers, please visit your local library and check out a book of poetry.