The cemetery is listed on the National Register of Historic Places and noted for its contribution to cemetery design in the nineteenth century.  Many of Bellefontaine’s tombs and monuments are recognized as important, unique features of the cemetery. 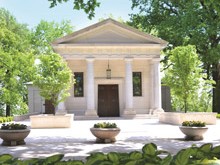 Designed by the noted architectural firm Eames and Young and constructed in 1909, Hotchkiss Chapel was named as a tribute to the designer and first superintendent of Bellefontaine Cemetery, Almerin Hotchkiss. Hotchkiss was a landscape gardener in the tradition of men such as Frederick Law Olmsted. He served at Bellefontaine for 46 years.

A complete renovation of the historic chapel was completed in 2009 and celebrated with a ceremony marking a century since the original structure was built. The renovation preserved much of the chapel’s original woodwork, the front and side doors, pews, and decorative wall sconces. The rear of the chapel features a new columbarium, with over 600 wooden and glass niches designed to hold cremated remains.

The chapel is available for memorial services as well as other events. With superb acoustics and seating for 50, it is an ideal site for musical performances. Past events include the Crusell Quartet, St. Louis Beacon Festival’s Bellefontaine Baroque, along with meetings of the Professional Tour Guide Association, the Garden Club of America, and the American Culture Association.

Wildwood Valley lies in the southwestern section of the cemetery. It holds two lakes, connected by a brook and gardens. The columbarium, providing 350 niches for interment of cremated remains, is sheltered in the center of the gardens, with fountains and benches for reflection.

George Warren Brown made his fortune as a manufacturer of shoes. His hexagonal mausoleum was designed in 1928 by St. Louis architects Mauran, Russell, and Crowell. Nearby is the circular mausoleum of George’s brother, Alanson Brown, who was an early president of Hamilton-Brown Shoe Company. His Romanesque Revival style tomb was designed in 1910 by St. Louis architect Isaac Taylor. 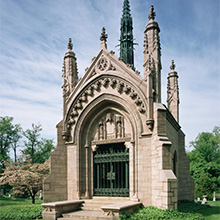 Designed by architect Thomas P. Barnett, this elaborate Gothic Revival mausoleum was constructed in 1921 using unpolished red Missouri granite. The mausoleum has a gray-green slate roof topped with a copper spire, ornate finials, and engraved grape vines. The bronze doors are topped with hop flower embellishments. The structure features elaborate stained glass panels, and thus resembles a small church. The Latin inscription above the entrance reads, “Veni, Vidi, Vici,” which translates to, “I came, I saw, I conquered.”

Born in 1839 in Germany, Adolphus Busch was the co-founder of Anheuser-Busch Brewery. He joined the business after marrying Eberhard Anheuser’s daughter Lily, who is also laid to rest in the mausoleum.

In 1891, St. Louis millionaire and brewer Ellis Wainwright commissioned architect Louis Sullivan to design a tomb for his wife who had died suddenly of peritonitis. Sullivan had recently completed the Wainwright Building in St. Louis, which is considered to be the beginning of modern skyscraper design. The mausoleum is a domed cube with simple carved decorations in Sullivan’s signature stylized plant patterns. The mausoleum’s double doors are bronze grills framed by delicate stone carvings. Sullivan’s draftsman for the project was Frank Lloyd Wright, who became one of America’s most illustrious architects. The unique tomb was added to the National Register of Historic Places in 1970.

This Egyptian Revival mausoleum, designed by Eames and Young, was built in 1907 by Frank N. Tate, who at the time controlled most of the theater property in St. Louis. He also owned theaters in Chicago and Buffalo, New York. In 1921, Mr. and Mrs. Tate erected the Lee H. Tate Hall at the University of Missouri as a memorial to their son , Lee Harry Tate, who was killed in an automobile accident that year. The mausoleum has an entry flanked by columns with palm capitals. An Egyptian winged disc is flanked by serpents above the entry, and a pair of granite sphinxes guard the front.