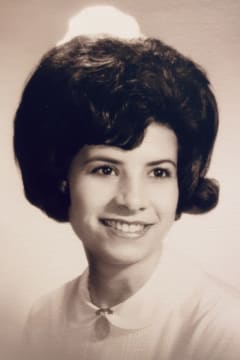 On Friday, September 30, 2022, Patricia Ann Smith (née Thompson), beloved mother and sister, passed away at age 78 due to complications from Parkinson’s Disease. She is survived by her daughter, Dawn Smith-Popielski (Nick Popielski) her sister, Jo Ann (Glen “Brownie”) Brown, who miss their Mama and Sister-Dear very much. She was preceded in death by her father, Angel Gligoroff Thompson, mother, Lucy Jane Thompson, and sister, Nancy Lee Brown.

Known to friends as Patsy and Pat, she graduated from Mansfield Senior High School in Mansfield, Ohio, in 1962 and from the Jewish Hospital School of Nursing in Cincinnati, Ohio, in 1965. She was passionate about caring for her patients, especially children, whether at Cincinnati Children’s Hospital; for Michael Leadbetter, MD, also of Cincinnati, OH; or as a home health nurse in Naples, FL. Pat was an avid gardener and rescuer of cats for most of her life, and enjoyed walking the beach and collecting shells, pressing fall leaves and flowers, sewing, crafts, sending cards, calling friends, listening to 80s music (especially Michael Jackson’s Thriller, Men at Work Cargo, and Hall + Oates H2O); and decorating for and celebrating holidays, especially Easter, Halloween, and Christmas.

In lieu of flowers, donations in her memory may be made to the organization of your choice. Causes especially dear to her were animal rescue, especially TNR (trap-neuter-release) programs for cats, and the Parkinson’s Association of Southwest Florida. You may also honor her memory by adopting a homeless animal, planting flowers, collecting buckeyes, or enjoying the sunset at a beach. As a breast cancer survivor of 10 years, she would have also reminded everyone to get a routine mammogram with a follow up!