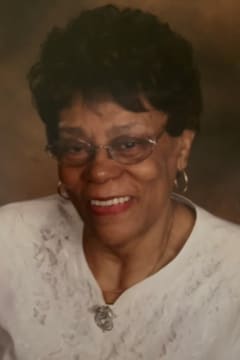 On January 18, 2021, our Beloved mother Mary Emma Taylor, age 89 and affectionally called TULA, departed this life after many months of declining health. There isn’t a day that goes by that we don’t miss her. The day Mama passed away is the day our lives changed forever leaving a hole in all our hearts.

Mama was born October 15, 1931, to loving parents Essie and Josephine Peterson Newell of Yazoo City, MS. Her father, Essie, served in and survived World War One and was honorably discharged for time served. After serving his country he could only find work as a sharecropper to feed and clothe his family. Sadly, her mother died when she was only 3 years old. Her father remarried some years later to Willie Mae Overton who help raise Mama and her brothers Essie and Eddie as her own.
At an early age Mama was baptized and joined the Baptist Church in Tribbett, MS, Mama spent her formative years in Tribbett, MS but later was sent to Leland, MS, to live with a family to continue her education at Breisch High School.

In 1958, the family moved to St Louis. Unfortunately, the marriage did not work. Leaving mama to raise 4 children on her own. Thankfully, Mama made a way for us with her meager earnings. In 1964 we welcomed our little brother Michael. Mama went on to earn her G.E.D. and a license in Cosmetology. She later took advantage of some college courses offered at Jefferson Community School which helped her secure a job as a clerk and then with some advance training became a Radiology Technician for the City of St Louis’s Courtney Health Center until her retirement in 1995. She was a member of Prince of Peace Baptist Church in St Louis, MO for several years until her health prevented her from attending. Mama was even-tempered, compassionate, and enjoyed spending time with family and friends. She was a stern disciplinarian and one look told you to cut out the nonsense. Before her health declined Mama was very outgoing, made friends easily, found joy in fishing, crocheting, cross word puzzles, playing the slot machines at the Casino and cooking for her family. After much cajoling from her granddaughter Kenya, she passed on her sweet potato pie and pound cake recipes. Which is a mainstay and is enjoyed every holiday. We miss her warm hugs and her infectious laughs.