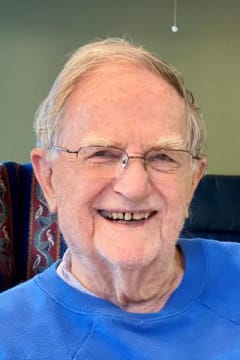 As the son of a pastor, James moved around often throughout Illinois, Missouri, and across the country. Early in his life he became fascinated with chemistry, mathematics, and electronics. As a young man, he loved chemistry experiments and was known for many accidental explosions. Beyond school, James loved chess. He studied chess masters, participated in tournaments, and conducted long-distance matches thru the mail.

After graduating from Santa Cruz High School in 1954, James moved to Springfield, Missouri where he met and married Donna Osborn in 1956. Together they moved to Ann Arbor, Michigan, where he graduated with a B.S. in chemistry. He continued his studies, earning his Ph.D. in chemistry from CalTech in Pasadena, California where his first son Brian was born. After assuming a position with Eastman Kodak he moved to Rochester, New York where his second son, Bruce, was born. In 1972, he returned to academia and studied medicine at the University of Chicago, earning his MD. Relocating to Saint Louis, Missouri in 1975, he began his residency at Washington University School of Medicine and began his practice in 1978. He continued to practice medicine until 1991. His passion for astronomy led him to move west again to Arizona in 1993, where he began tutoring astronomy while working at Kitt Peak Observatory. Soon after, he acquired a 150-acre ranch and moved to the dark sky of Arizona’s southeastern corner. Building his observatory, telescope, and digital camera system, he studied the stars for several years, while hunting comets, asteroids, and meteors. His efforts lead to the discovery of many asteroids, including several which he named after his beloved grandchildren.

In 2008 he returned to Saint Louis and poured his time and attention into his grandchildren at every available opportunity. He loved tutoring his grandchildren in school subjects such as chemistry and sharing his contagious passion for learning. Family dinners, birthday parties, holidays, and weddings were the highlight of this time of life. Throughout these later years, he openly expressed how much he treasured living, laughing, and gathering with his family.

He will be buried at Bellefontaine Cemetery along the Wildwood Garden wall.