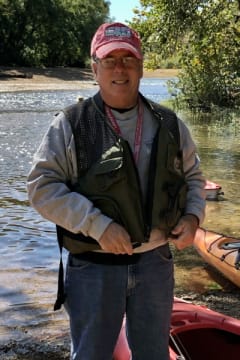 Frank C. Kohn, Jr., died of prostate cancer on Friday, Sept. 11. He is survived by his wife Florrie and daughters Rachel and Jessalyn. Frank will be remembered for living life well. He liked to camp, kayak, fish, hike, travel, and work in the yard. His day began with bacon. He marked the evening with a gin martini, and, at night, he indulged in ice cream with chocolate syrup.

In 1956, Frank was born in Montgomery, AL; he was raised in Miami, FL, and Atlanta, GA. He paid his own way through the University of Georgia, graduating with a Bachelor of Science degree in Agriculture (plant pathology and entomology) and continuing on there to achieve a Master of Science degree.

Frank always worked. He delivered newspaper as a youngster. He fried up fries and washed dishes at Burger King, Shoney’s and Red Lobster. He suited up as the Dancing Gorilla at T.G.I. Friday’s. He mowed lawns. For science’s sake, Frank dissected fruit flies and picked rotten apples. He scouted peanut and cotton fields for insect damage.

In his professional career, Frank worked briefly for Mobay at a hands-on research farm near Tifton, GA. He then departed on a long and satisfying career with Monsanto in St. Louis, MO. Frank believed in well-done research and accurate data. At Monsanto, he found many friends who felt the same. Over the course of his career, Frank racked up more than 20 patents. He traveled the world evaluating corn and soybean research plots, made even more friends, and savored the local culture. Frank was fearless.

After retiring from Monsanto, Frank played. He also served as an agricultural research consultant for IN10T. Recently, IN10T presented Frank with a plaque designating him as “Most Knowledgeable.” He was extremely proud of that honor.

In Frank’s honor, for those who care to, the family welcomes cards and shared memories. It is also accepting donations to Good Samaritan of Manchester, TN. This food pantry, run by Frank’s favorite Aunt Joy, provides food to people Frank will never meet. It is fitting, as he wanted the world to be a better place for family, friends and strangers.

Preceding him in death were parents Frank C. Kohn, Sr., and Marguerite (Rita) Marriott, as well as his beloved sister the Rev. Dr. Mary Marguerite Kohn. In addition to Florrie, Rachel and Jessalyn, Frank is survived by sisters Kathy (Jess) Shirley and Jeana Kirkpartrick, his beloved mother-in-law Mary Hickson; in-law siblings Kenneth (Sally Metz) Hickson and Nancy Preston; and a bevy of nieces, nephews and cousins. Frank’s ashes will be interred at Bellefontaine Cemetery in north St. Louis. Memorial services are private due to COVID-19. God willing, a celebration of Frank’s life will follow next summer.