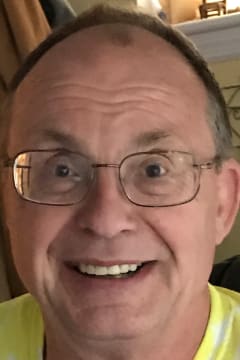 Dennis was the son of the late Amelia Schmidt Engelkenjohn and Herbert Engelkenjohn. When he was born in 1953 at the old St. Anthony’s Hospital in South St. Louis, the family lived in the city’s Soulard neighborhood. They later lived in Bourbon, MO, and Bevo Mill in St. Louis before moving to Desloge, MO, when Dennis was a junior in high school. He attended Cleveland High School and graduated from North County High School in Desloge in 1971. Dennis earned a bachelor’s degree in business from Lincoln University in Jefferson City, MO, in 1989.

His rich and varied career included working at the Chrysler Plant in Fenton, MO. Following a layoff in 1981, Dennis relocated to Lake of the Ozarks and began what proved to be an exciting new chapter in his life. In May of that year, while running Billy’s Fireworks on the Bagnell Dam Strip, Dennis met and fell in love with Karen. She had come to the store with the cousin of a friend to buy fireworks. At the time, Karen was opening Godot’s, a homemade ice cream store across the street. They married that October, and Karen and Dennis would co-own Godot’s for the next 13 years; he made the ice cream and ran the manufacturing side. They sold the business in 1993, and Dennis then learned to set tile in swimming pools.

After 19 years in Lake Ozark, MO, Dennis and Karen moved to the Tower Grove Park neighborhood of St. Louis in 1999. Dennis embarked on a career setting tile in homes and joined the Floor Layers Union Local 1310, part of the Carpenters Union. He retired in 2018.

Dennis was very much a family man—a loving husband and father who enjoyed finding new activities for the family to enjoy. Dennis and Karen’s adventures together included camping, kayaking, taking float and road trips, riding their recumbent tricycles, attending live music festivals, and playing board games.

Karen described Dennis as “a maker with a helper’s spirit.” Very mechanically minded, he was always fixing, making, and building things—and loved helping others in small and big ways. He also loved dogs and had seven during Dennis and Karen’s 41 years of marriage.

Flying was always a passion for Dennis. His aerial exploits included jumping off chat dumps in Desloge, MO. in hang gliders, and parachuting out of Sparta, IL, in the late 1970s. He bought a weight-shift ultralight powered glider late the 1980s and flew out of Eldon, MO. Dennis also built a Mini-Max Ultralight plane at home while living in Lake Ozark and flew it out of Eldon. When the family moved to St. Louis, Dennis got hangar space at Sullivan Field in Columbia, IL. Eventually he obtained a Corbin airplane. An ongoing project was building a Pietenpol Air Camper (a wooden plane) in the family’s basement.

Dennis' dedication to flying included working with fellow members of Chapter 64 (Millstadt, IL) of the Experimental Aircraft Association (EAA). A member of EAA for 30 years, he served as president of Chapter 64 from 2020 to 2022. Dennis attended the EAA Airventure in Oshkosh, WI, more than 30 times, and the annual Pietenpol Fly-In in Broadhead, WI, more than 20 times.

A party in Dennis’ memory is being planned in lieu of a funeral. For those wishing to make donations in Dennis’ memory, the family invites them to support the Experimental Aircraft Association, especially the Young Eagles Program, at https://www.eaa.org/eaa/support-eaa/give.