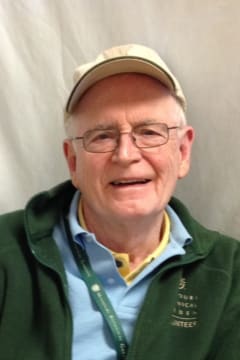 Born on February 6, 1937 to Georgia and Charles Gravens in Latonia, Kentucky, Dan grew up in Northern Kentucky with his sister Wanda. He attended the University of Kentucky and graduated from Thomas More University in 1960. He earned a Master’s Degree in Biology in 1969 from Southern Illinois University and a Master’s in Marketing from Webster University in 1982. He worked as a microbiologist at University of Cincinnati Medical Center, Barnes Hospital Department of Surgery, where he did research in burn treatment, and Vestal Laboratories in St. Louis. In 1978 he transitioned to the Marketing Department as a Product Manager and later Director of Marketing at Vestal, and for the subsequent companies that acquired Vestal, including Merck and Bristol-Myers-Squibb.

In 1960 he met the love of his life, Carol Klosterkemper, and they were married in Cincinnati on June 16, 1962. They moved shortly after to St. Louis, where Dan took a position as supervisor of the surgical microbiology laboratory at Barnes Hospital. Their first child Christopher was born in December, 1963; their daughter Laura in June, 1966; and their son David in June, 1970. In July, 1999 Dan was overjoyed to become grandfather to twins Clara and Anna Mueller.

In his retirement Dan became a Master Gardener and Master Naturalist, and was a longtime volunteer at Missouri Botanical Garden and the Missouri History Museum. He was past president of the Orchid Society and a founding member and officer of Gateway Koi and Pond Club. He was very proud of his koi pond with crystal clear water and prize winning koi. He was an avid long distance cyclist, hiker, sail boating enthusiast, piano player and British car enthusiast. He loved history, the theater, and the symphony. The gardens in the Gravens’ yard were featured in several publications, as well as being on numerous garden tours.

Dan was diagnosed with mesothelioma in September, 2021, and left this world at home on December 1, 2021 in the presence of Carol and his three children.

Dan will be remembered for his quiet kindness and intelligence, his love of mentoring young people, and his special way with children. Everyone was his friend. He had a dry wit and a willingness to try anything new. He will be missed by so many.

Memorials to Missouri Botanical Garden are appreciated. A memorial service will be held at a later date.