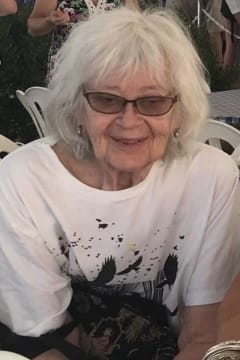 I have put off writing my mother’s obituary for over a year now. Who does that? No one. How can I sum up her life in a few paragraphs? It seems impossible and wrong.

My mother always loved to have the last word so for the first time, I really wouldn’t be annoyed if she spoke her mind. In fact, I’d give anything to be annoyed by her again. She was nothing if not opinionated. “I’m a New Yorker, that’s how we are.” I can hear her say.

She railed against the injustices of this world like expensive bad auto mechanics, corrupt corporations and telemarketers. I used to prank call her and pretend to be a telemarketer. I tried to sell her “The Clapper” one time. Eventually she hung up whilst curtly intoning, “I’m not interested. Goodbye.” Her usual refrain. I called back pretending to be the supervisor. I laid a guilt trip on her and told her “My employee is in tears because of how rude you were Mrs. Swinson. Did you know Susan has five special needs children to feed and three dogs without legs? She was only doing her job so she could go home and feed her children and tend to the dogs.” All said whilst sounding a little like Carol Channing. She felt guilty. It was one of my finest moments before the age of caller ID. I miss prank calling her like you wouldn’t believe.

She was born in Brooklyn on November 18th, 1931, the only child of Lillian Aaronowitz or Aaronowitch and Hyman Schulman or Shulman. I never found out the correct spelling and to be honest, I don’t think she knew either. Her given name was Honey but after forgetting her glasses one day she switched to one of her middle name’s, Connie. As she walked home from school that unspectacled afternoon, her cousin pulled up and said, “Hey Honey, hop in the car, I’ll give you a ride.” So she did. After focusing her eyes, she realized it wasn’t her cousin. She hopped out of the car and never went by Honey again. But she loved that old Bobby Goldsboro song, “Honey.” I’m sure in heaven she has resumed use of her given name (no one there with nefarious intentions is going to beckon her to hop in their car; she’s safe, at last).

She should’ve been a recognized artist. But who took women artists seriously in her day (and in this day?). She left behind thousands of paintings. That’s probably not hyperbole. Jackson Pollock was her favorite artist and she loved discussing art and Rothko et al. She thought Rothko was a badass or maybe just depressed. She loved that he did his own thing, his own way and that he didn’t seem to care if people couldn’t understand large blocks of color.

She studied art at the Art Student’s League in New York, The Brooklyn Museum and The San Carlos Institute of Art in Mexico City. She was way ahead of her time. Her art is amazing but she held on to her paintings like she was cradling newborns with delicate anomalies. She had trouble letting them go. Now, I’m cradling legions of anomalous newborns.

She gave birth to me, Sara Hope Swinson; my brother, David Swinson and my sister, Kyle Swinson. She has left behind grandchildren, Pablo, Sheyna, Chad, Vivienne and great grandchildren Elli and a boy on the way.

How she gave birth, I’ll never know. She hated hospitals and anything related to pain. I grew up thinking she was dying, because she grew up thinking she was dying. She often shared that as a child, “the doctors said I wouldn’t live past 30.” She had a kidney issue which never, in actuality, manifested until she was 89. She was freaked out about turning 90 so she left before then; the leaving had to do with her kidneys. It was May 8th, 2021.

She was always afraid of dying and while a lot of people “live lives of quiet desperation” and do not air their fears about their own mortality, she lived a life of expressive desperation and struggled with her fears aloud. But when it came down to it, to her last breath, she left peacefully.

I miss you so much, mom! You are so loved. I miss your humor and your spirit! So much!

Her last words to follow—an essay she wrote when she was about 65:

“I prayed, waiting for my elusive Jewishness to engulf me. Something inside knows that it has always been hidden and missing and I long for that identity. It is me! I am a Jew! And although believing the Messiah has already come in the form of the Jewish Jesus Christ I must identify with my people or die in the solitude I now live in. I think of Elie Wiesel who struggled for survival in the death camps of Buchenwald and Birkenau. Separated from all family except his father who was a Rabbi in their small Hungarian town, separated from his son’s needs for demonstrative affection, nurturing him only in Talmudic embraces. They live with death in the camps and sacrifice for each other, the depth of father son love knowing no boundaries. They live with death in the camps. The father dies alone calling for his son, who is held back by Nazis. His father dies alone, and the longing to see his father manifests in dreams. Elie Wiesel, a student of the Talmud, of Kabbala, delving into spiritual mysteries as only a Jewish mystic can. He talks about scholars, philosophers, teachers, friends who touched his life and I am envious. I desire this wisdom. I thirst for the knowledge of the scribes. I realize after all these years I have lived, all the experiences I have had, I truly know nothing. Harsh? Perhaps, but this is true for all living creatures, scholars and imbeciles. We know nothing—we understand nothing and we are vain to think we are empowered by success, the lack of it or our own spirituality. We walk in a nebulous kingdom, near the brink always. One misstep and we are over the edge. Into the abyss, the unknown and that is why we strive to know, to understand. We fear that fall or we accept it as our fate and walk blithely along the trail of life as each knows it. That is why, I believe, God sent His Spirit as man, to show us we can fall and there is a life far beyond this one—far more wonderful. Hopelessness dissolves and we become whole, yearning dissipates and we can believe, trust and walk the trail with sure feet.

Maybe that’s where Jewish spirituality fails me. Seeing only the abyss, and only through study and searching is there a kind of peace and acceptance and survival but beyond that the question echoes, why, why, why?”